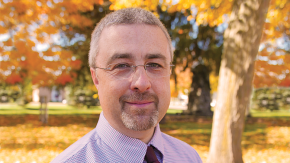 Born into a pastoral family, Elder Conrad Vine grew up with his twin brother and two sisters in homes across the UK. After graduating with a business management degree (1995), he served in the UK public healthcare system before God led him to ADRA (1996). Initially serving in Azerbaijan, Elder Vine served with ADRA through 2002 in a variety of roles worldwide. Following seminary training at Newbold College (2002-2004), he and Luda began their pastoral ministry in London, UK. After a stint in the Middle East Union, they served in the pastoral ministry for 4 years in Minnesota following which Elder Vine answered the call to serve as President of Adventist Frontier Missions (AFM). Elder Vine is an ordained minister of the Gospel in the SDA Church. Conrad and Luda were married in December 1999, and regard their marriage as a personal blessing from a loving Heavenly Father. They have two children, David and Christina.

“Looking back, I can see how God has lovingly shaped and prepared me to lead AFM” says Elder Vine. “Life’s experiences have brought tears of both joy and sorrow, but the Potter continues to shape me for His purposes. My dream is that people of every nation, tribe, people and tongue will be saved, and my joy every day is to see the Holy Spirit at work, drawing people from around the world into God’s kingdom. What a privilege! What a joy!”

Pray about serving as a Platinum Missionary — on one-year recurring service cycles, and pass on the greatest wealth of all — the Everlasting Gospel.

God acts through human agents, and there is no limit to what He can achieve through an individual fully consecrated to Him.

I praise God that in such a hostile world in which so many say, “We do not want this man to rule over us,” so many are faithfully using the talents God has given them in sacrificial prayer, giving and front-line service that the Good News of His return might be proclaimed worldwide.

End of the Time of the End?

We are not only looking forward with anticipation to 2021 and what God will do among the unreached, but we are also looking forward to the end of the Time of the End, when “. . . Michael, the great prince, the protector of your people, shall arise” (Dan. 12:1).

The Antidote to Fear