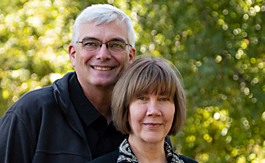 Career Missionaries since 2006, serving the Shqiptaret Muslims of Albania.

Sean and Brenda met at a U.S. Air Force base in Germany and were married two years later. They became Seventh-day Adventist Christians six years after that. Missions was on their hearts from the start. Evenings with their two daughters were often spent reading mission stories aloud.

Sean and Brenda and their daughters Megan and Moriah were called to Albania individually and together through a series of providential events. They all prayed for the people of Albania for over two years before they moved there with AFM to serve the people God had placed on their hearts.

Sean and Brenda have enjoyed serving the Albanian people since early 2006 and have been blessed to be part of a growing fellowship of Adventist believers in an area where there were none before. Additionally, they serve as AFM field directors for the Balkans, the Middle East and Eastern Europe.

To see if Sean and Brenda Mays are coming to a church near you, visit the Speaking Appointment Calendar.

We invite you to join us in prayer for our friends, Gjergji’s family, and their journey of healing and faith.

The Attraction of Service

Though Alban and Dani have very little, they agreed that serving those in need brings more joy than riches for oneself.

In these uncertain times, those who know God’s word must remain flexible and sensitive to His leading.

We have also experienced deep gratitude for the way God has opened doors in Albania. It reminds us to place our trust in Him no matter how bad things may look.

As soon as we first sensed God’s call, we prayed for the people he was calling us to serve. We prayed for God to prepare and soften their hearts and ours.