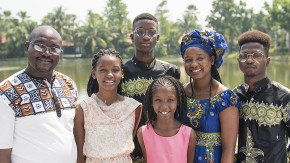 The Susu Project has gone through two phases. Phase one began with the project’s first missionaries, the Coleman family. Our family had the privilege of joining this project in 2002 as Bible workers. During this phase, together with the Coleman family, a church-group was planted with about seven local members. We also started a school with five students. This phase ended in 2010 with a church group of 15 baptized members and the school serving about 100 students.

The second phase started in 2012 under our leadership as AFM career missionaries. As we forged friendships with our Muslim Susu neighbors, we have meaningful theological discussions with people who have never considered Christ’s salvation. We also are constantly working to build our school’s ministry. The church-group has grown to become an organized church with 50 baptized members and 60-70 people attending each Sabbath. We also have two daughter church groups in two surrounding villages. We have groomed church members for leadership positions. Currently, they are leading all of the church activities. We are now starting to teach about the sanctuary doctrine and basic Bible prophesies.

By mid-2021, we plan to move to another country to start a new AFM project.

Meanwhile, the Cokers (who are originally from Sierra Leone) have transitioned to the initial start-up phase of the Kono Project. The Kono have been a high priority unreached people group for the Sierra Leone SDA Mission for many years, but there has been an absolute lack of Gospel workers and finances to initiate new Gospel outreach work among the Kono due to a variety of factors, e.g. the Ebola outbreak and the civil war in Sierra Leone etc. After repeated requests from the Sierra Leone SDA Mission, AFM has agreed to assign the Cokers to lead the new Kono Project. The Cokers speak Krio and English, the dominant languages among the Kono, and bring many years of successful church planting among the Susu of Guinea to the new Kono Project.

The Sabbath is becoming an issue for most of our young Adventists across the globe, especially in developing countries.

By providing high-quality education for our students’ minds, we gain the opportunity to educate their hearts and bring them to Jesus.

Ernestine was the first to come forward. Our eyes met, and we both began to cry. God had done His part, so Ernestine was doing hers. She was baptized that day in her new Pathfinder uniform.

The joy was overwhelming. Everyone rushed forward and pressed around Pastor Oumar, his wife and their first daughter.